Before you start reading, let me point out that I haven’t use Ubuntu since its early development, and by the time the first install images came out, my interest on the distro rapidly banished. It came out as something new, and it truly was; however, back then in late 2005, it just felt like it was a reinvention of the wheel. Another distro based on Debian, another philosophy that half-matched Debian’s solid policies.

By the time Ubuntu was a stable release, it was mastering the end-user experience that they promised: The Linux Desktop Experience. So what made me move away from it? the Desktop feeling; add-ons everywhere, GNOME in here and there, GTK+ in that, and the icons Oh! The icons! Those were my pet peeves on any GNU/Linux distro. I like to keep it minimal, clean, and CLI friendly.

Ubuntu shows off
Last weekend, while my girlfriend was using her laptop, I found myself intrigue by the fact that it fulfilled all the expectations of my girlfriend’s daily tasks with an OS. Before that, I vaguely remembered that she told me, she was going to install Ubuntu, well this seemed more of a testing phase than an actual full migration. By now, with the help of her friends, she fully migrated from Windows, and she couldn’t be happier since her first remarks of Ubuntu were “Everything is faster, and it feels more natural now.” 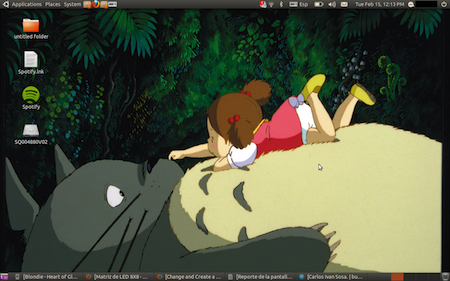 After the full installation, my girlfriend didn’t install anything, until she needed several applications for her college courses. For example, Mono for C#/.Net, and Skype to talk to her Mom. For the normal user tasks like writing and social media, she uses the default installed applications. You know the basics: OpenOffice.org suite, Empathy, Gwibber, Gnome Media Player, etc… You get the idea. 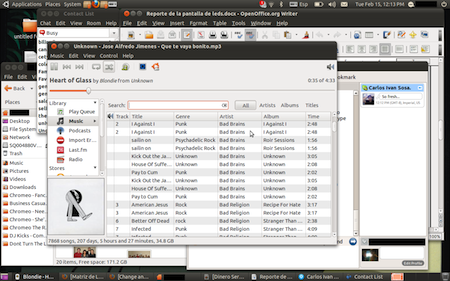 What amazes me the most, is the feeling of everything working right out of the box, and this includes the installation process. No further configuration, everything well thought for the common user. I can’t stress how much GNU/Linux distros needed to take this route to be attractive to the common user. Of course, there are other distributions built for the Desktop user, yet they lack the convincing Desktop features that Ubuntu offers. The spaces, the menu bar well placed, the menus categories, and how everything works around the Desktop; brings some comfort for everyone new to Ubuntu. The menu bar placed in the top, is a natural feature to the Mac user, and for those coming from a Windows environment, the speed captivates them.

Continuous learning
It never occurred to me that my girlfriend was using the gnome-terminal to install different packages. “I use the Package Manager to search for a program, grab the package short-name, and after that I installed via apt-get in the Terminal.”

This is a good starting point for her, it shows that her interest in the distro is still fresh. Like any new user, the disposition to learn becomes a fun stage. The fun of learning turns into useful work, and in the end, the user is gaining a new set of skills.

Any OS has its learning curve, specially, GNU/Linux distros. But Ubuntu seems to take the best from both modern popular OS. This makes the transition funner, and inspires to try new things. Recently, one of my friends, told me about her girlfriend doing the Ubuntu to Debian testing transition. Which is great, and proves the point of trying new things.

I can’t wait to see my girlfriend using Vim.